early review of "song of the pearl" on uncut.co.uk 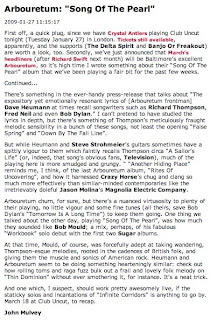 Inneresting how the guy references Bob Mould. I never really heard his post-Husker Du stuff, but maybe that'll be something to check out. He always struck me as this rather "serious songwriter" type, one that someone listens to when they really need some songs that feed the intellect. I could be completely off-base there, but that's at least the impression that I got when I was a kid working at a bland corporate record store and Sugar was in the "featured hit zone", or whatever they were calling it.

Also, I should point out that we won't, in fact, be in London for the show the review references. See the earlier entry "re-adjusting the flow" for reasons why.
Posted by David H at 3:46 PM

I've been fortunate enough to have lived a couple of weeks with Pearl and I'm not sure I completely agree with the Bob Mould angle, although Workbook would be closer than any of the Sugar catalog. Although, I totally get the Richard Thompson comparison. There is a familiar English folkyness to some of the music.

That said, "Thin Dominion" is very Joy Division. LOL. That rolling tom and guitars at least, not the vocals. :-)