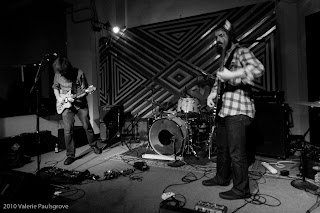 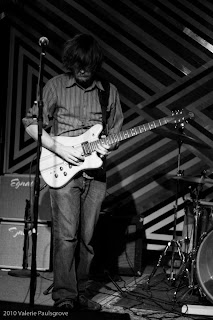 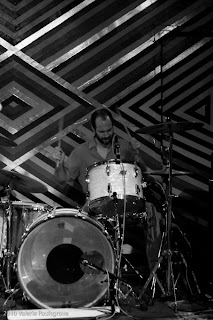 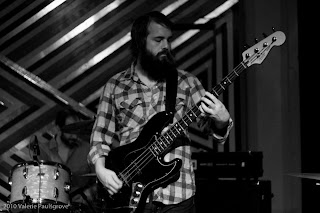 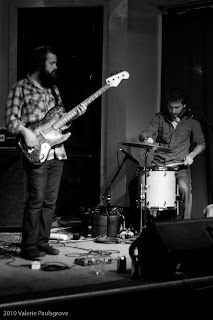 Here are some photos taken at last Wednesday's Baltimore show at the Metro Gallery, taken by Valerie Paulsgrove.
An excellent show overall- Pilgrim opened the night and were great, then Caltrop (who I hope will be seeing some wider recognition soon as they really deserve it), then us.
As some of you are aware, Matthew Pierce is out of the country for the next couple months, so for that show we had excellent drummer/percussionist Michael Kuhl sitting in with us, playing a floor tom, various shakers and a cymbal. We ended the set with
"Waxing Crescents", a newer song, and Buck and Mike played a full-on double drum solo at the end.

The following night's New York show at Union Pool in Brooklyn was pretty goddamned epic, if we may say so ourselves.
Caltrop opened, then we played afterward, followed by Endless Boogie.
We opened with a newer arrangement of "Song of the Pearl" and I broke a D string halfway through.
Corey then got a bass loop going and I layered a two-note guitar loop on top of that to play while I was changing the string. We then went into "When Delivery Comes", a song from the new record, and that was the end of the "actual songs" portion of our set.
We then began a version of the Velvet Underground's "Sister Ray", a song that was to ultimately last about two hours. Hans Chew from the D.Charles Speer band joined us at this point on keys. We played it for around 30 minutes, allowing the structure to build, dissolve, then come together again, at which point the members of Endless Boogie began replacing us on stage one by one as our set segued into theirs.
Watching them play after we had finished was truly amazing. Those guys are at the top of their game these days, having toured so much in the recent past. Their command of the long-form rock jam is nothing short of extraordinary, and "Sister Ray" is about as appropriate as any song they could cover, being Lower-East-Siders themselves that are prone to, well, boogieing endlessly. I really wish someone had recorded that set, but to my knowledge no one did.

The following evening we were in Philly at the Danger Danger house, a DIY spot on the West side of town. For some reason one of the local bands had canceled and the gig started an hour late. We were upstairs in the green room trying to generate enthusiasm for playing at all, which never really happened. As Caltrop began their set, it became apparent to us that we weren't going to bring the kind of experience we are best at delivering to anyone, not that there was much of anyone present anyway. There was a small handful of people that had mainly been there to see the local opener, and a few people who were friends with Caltrop.
By the time Caltrop finished (we told them to feel free to play as long as they wanted to), there were maybe 4 or 5 people standing around, it was coming up on the venue's midnight curfew, and we were tired and looking forward to being in our own beds asleep. The only person that came out to see us was Meg Baird, and we were having a really good time hanging out with her upstairs watching a mutual acquaintance appear on Letterman with a 90 lb squash he'd grown. The night before had been so incredible anyway that there was really no topping it. Best go out on a high note...
This was the first time we ever chose not to play a gig once we were there, but it's a decision we stand behind. Caltrop had played an excellent set, and for us to go onstage after them and play to 4 or 5 stragglers just didn't seem as much of a viable option to us as simply going home did. An hour and a half later we were back home in Baltimore, unloading the van.
Posted by David H at 7:33 PM