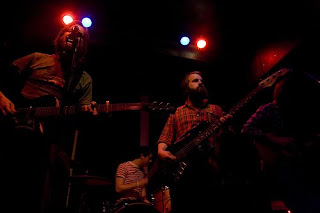 First off, thanks to everyone who came out to share the music with us for these regional release-oriented shows. All of them were very different from one another, and in my opinion, all quite good.

PHILLY, MARCH 2 AT KUNG FU NECKTIE- We awoke that morning in Baltimore to about six or seven inches of snow. We'd heard weather reports that the winter storm was moving up the east coast toward Philadelphia, and with the heavy snowfall, high winds, and record low temperatures, it seemed that Mother Nature would not be cooperating with us that evening. We needed to make a call about whether or not we would cancel at around noon so that Corey could get someone to cover his shift at the restaurant and Steve would be know if he would be attending the rehearsal for the play he was taking part in in the early evening. Fearing that the elements were working against us, we at that point made the executive decision to cancel.

Then at around 2pm, reports were coming in that the snow had stopped in Philly, and it had already stopped here. Interstate 95 was, at this point, clear and dry. I contacted everyone a second time with this new information, because in my view, there's no point canceling a show if you actually can make it happen. But alas, Corey and Steve had at this juncture re-scheduled themselves, and it seemed re-re-scheduling would be a logistical impossibility. I then decided that I'd go up and play a solo set. I had nothing better to do that night anyway, and figured I could use the opportunity to challenge myself by playing in a different format.

In the end, I was really glad I did. A fair amount of people came to the show, and the music of Meg Baird and James Blackshaw was nothing short of spellbinding. I stayed at Meg's apartment, which featured perhaps the most comfortable pull-out guest futon I'd ever encountered, plus a fascinating and well-written book about the Grateful Dead's gear, which I thumbed through before bedding down for the evening.

songs I played were (in no particular order):

Our hometown release show at the Talking Head Club. Those who came early got to see first Meg, then James, play; and nearly everyone I spoke to were amazed by their sonic finesse, taste, and virtuosity. By the time we took the stage shortly after 11, the audience seemed like it had doubled in size, and in my opinion we played together as well as we had at any time over the past year, despite out not having gotten to rehearse all that much.
The set was:

This show was to be done as a three-piece, as Steve had a bit of a scheduling snafu relating to the play he was in. It was a gorgeous day for a highway drive, with the high temperature around 65 and the sun clear and bright. Dan drove separately, and on the way up, Corey and I blasted about an hour of a particularly awesome Dead bootleg (5-08-77, for you GD nerds out there), followed immediately by Earthless's Live at Roadburn, which is arguably the best live rock album in recent history. The stated goal was to pump ourselves up a bit by listening to particularly inspiring live jams, and it really seemed to work out for us.
We had the rare treat of being joined mid-set by our longtime friend Matt Sweeney, who had learned the songs by having them emailed to him the day before. If there's ever been a guy who can step right in and give 100% with very little or no preparation, it would be Matt. His contributions have enriched countless recordings by people you've heard of, and he's a live jammer without equal or peer. He's the kind of dude who's so completely there, you can lock eyes for a nanosecond and know each other's intentions...a musical martial artist of the highest order, and all-around good guy to boot.

Songs we played were:

After our set, Pissed Jeans took the stage and tore the place apart.

Live photo taken at the Talking Head Club by bmoremusic
Posted by David H at 1:31 PM

Thanks for an awesome show in baltimore, and for the mention of our pics posted from that night!

Looking forward to another great at the Zodiac in a few weeks.