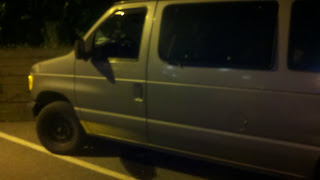 Buck, Corey, and I were on our way to the Cakeshop in Manhattan for a show with a friend of ours' band, sitting in Holland Tunnel traffic. The temperature was in the mid to upper 90's, and with no air conditioning in Buck's van, we were reduced to manually oscillating a small-ish clip fan, which was designed to oscillate, but had lost that function several hours before.
I was sitting shotgun, and with the window open I heard a man's voice calling from my right.
"Hey, you've got a leak there".
At this point, traffic was completely stopped and I got out for a look. The fluid was dark red and gushing. Transmission fluid- not good. We were about 500 feet from the mouth of the tunnel and there was only one turn-off point left before the toll booth. Somehow we managed to signal to the drivers on our right to let us through and the van limped its way in to the parking lot of the Holland Motor Lodge, an aged but otherwise nondescript-looking brick hotel whose lot was continuous with that of the Burger King to its right.
We sat outside in the heat as winds gathered and the sky darkened, making phone calls and just generally trying to figure out what to do. The transmission had completely cracked open and there was basically no hope of fixing it that would have been worth the money or effort. I was on hold with AAA to try and get a free tow to the gig when Buck told us he'd found a guy with a van that could pick up us and our equipment and take us there. Not free, but if we'd have sat around and waited two hours for the AAA guy, there was a good chance we would miss our set. I hung up. Still, the guy coming to get us lived in Williamsburg and Friday night traffic was heavy, so we were going to be waiting a while.
I went over to the Burger King and got cokes for everyone. Leaves, dust, and bits of paper blew over the concrete and opaque purple clouds drew closer. After a few minutes of this, thunder cracked and heralded a ferocious downpour and we were back in the van, using the last of its battery to power the non-oscillating oscillating clip fan as we watched through the rain for approaching headlights.
Posted by David H at 10:37 PM